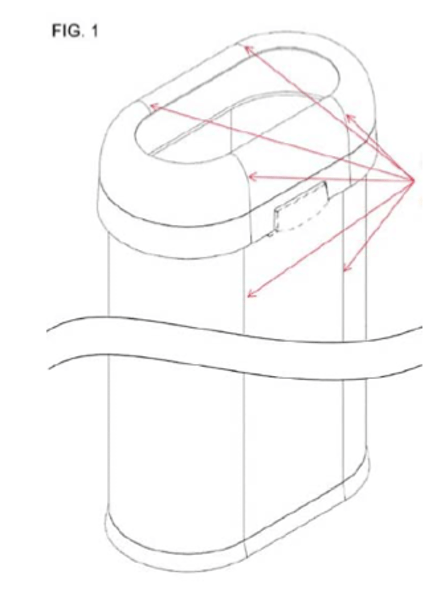 Following a drawing convention in the wrong way can result in your design patent being misinterpreted by the courts – greatly reducing the value of your patent because it won’t be protecting what you thought it was protecting.

simplehuman, LLC, learned this lesson the hard way in a recent court battle with iTouchless Housewares and Products, Inc.

simplehuman sued iTouchless for patent infringement, claiming that iTouchless’s Open Top Trash Can, pictured below at left, infringed its US Patent D644,807. Figure 1 from the patent is pictured at right.

To a casual observer, the pictured trashcan certainly looks very similar to the figure in the patent. So what was the problem?

iTouchless argued that the patent included seam lines, which are missing in their product, making it substantially different than what was in the patent. simplehuman said those lines aren’t seam lines, they are simply unclaimed contour lines, intended to show the rounded shape of the trash can. The below illustration points out the lines in question.

The court issued a Claim Construction Order to determine whether the lines indicated above are claimed ornamental features or unclaimed contour lines.

In claim construction, simplehuman argued that the lines are shading or contour lines that simply show the shape of the trash cans. iTouchless said the lines are seams because they are shown at the same weight as other lines – convention and regulation both would suggest that light, tightly-spaced lines are what should be used to indicate shading. iTouchless quoted the applicable regulations, 37 CFR 1.84(m): “Spaced lines for shading is preferred. These lines must be thin, as few in number as practicable, and they must contrast with the rest of the drawings.”

A different one of simplehuman’s patents, not a part of the lawsuit makes the point by showing contours and shading in the appropriate fashion. The below figure is from their US patent D835,374 for a different trash can:

The court found in favor of iTouchless – it said, “The specification largely resolves the dispute. The illustrations in the design patents show the disputed lines in views where they cannot possibly represent shading.”

The bottom line is that by failing to follow the proper convention for showing contours, the court found that simplehuman’s design included seam lines, which was not their intention.

This case is a good example of why it’s important to have an experienced patent illustrator prepare your patent drawings. An illustrator more familiar with the proper conventions would not have made this mistake, and iTouchless likely would have been found guilty of patent infringement.

If you have any questions or would like information on how we can help you with your patent drawings, please contact us.