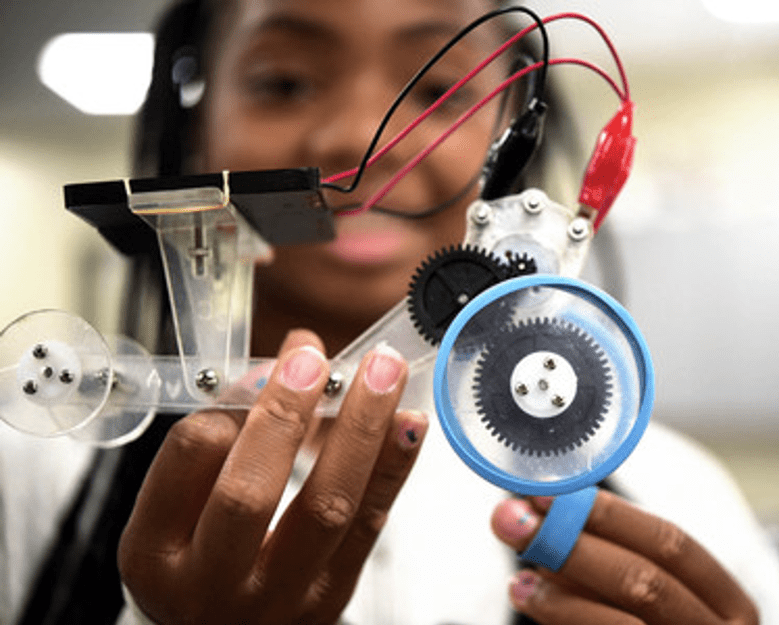 There’s no age requirement for getting a patent, and the youngest person to be granted a patent (so far) was a four-year-old Houston girl who invented an aid for grasping round knobs.

A little-known holiday called “Kid Inventor’s Day” is celebrated on January 17 – Benjamin Franklin’s birthday. Franklin, a renowned inventor of things like bifocals and the Franklin stove – got his start at age 12, when he invented swim flippers.

Inventing isn’t just fun for kids – it can even be lucrative.

Kids have come up with all sorts of profitable inventions, including the “Makin’ Bacon” vertical microwave bacon cooker, created by eight-year-old Abbey Fleck. The company her family launched as a result earned more than $1 million in royalties annually.

Eleven-year-old Richie Stachowski created an underwater communication device that he pitched to Toys “R” Us – which promptly ordered 50,000 units.

As Wired reported, ten-year-old Owen Nannarone invented a golf tee that records the angle and speed of a golf club and sends the information to a smartphone. You can see what Wired called the “World’s Cutest Patent Drawing” here.

(We agree that it’s a cute patent drawing – but it probably wouldn’t be accepted by the US Patent Office, as we explain in this blog.)

Owen’s parents believe drawing patent applications and thinking of new inventions is a great way for Owen to focus his energy, which might otherwise get him in to trouble.

Here are some Christmas present ideas for young inventors.

There’s a variety of CAD (computer-assisted design) software designed for kids – some of which interfaces directly with 3D printers.

CAD files are the basis of most modern patent drawings for patent applications.

The littleBits Avengers Hero Inventor Kit ($111) allows kids to build an Ironman-style gauntlet that can be controlled with a smartphone.

Makey Makey ($50) is an open-ended invention kit that lets kids do things like turn bananas into touchpads.

Kids Inventing! A Handbook for Young Inventors by Susan Casey ($16) explains the invention process from finding an idea through patent drawings and prototypes. It even explains how to apply for a patent in kid-friendly language.

The Most Magnificent Thing ($12) is a picture book for ages 3-7 about a young girl who creates drawings of her inventions that “supportively portrays the sometimes-frustrating process of translating ideas to reality.”

Cricket Media offers several publications on inventors and inventions, for kids of all ages, for just $6.95.

Creation Crate (from $29.99 per month) delivers kits that parents and kids can work on together to build things like mood lamps and FM radios.

Parents on a budget can create their own Young Inventors kit using common household items.

Donate to a Worthy Cause

Little Inventors, a UK-based non-profit, is dedicated to giving “children across the world the opportunity to develop and showcase their creativity and problem-solving skills, build their confidence, curiosity and resilience to become caring citizens of our planet.”

Patent drawings are so affordable, you could even have your child’s own drawing turned into something more polished as a special present.

When you’re ready to have professional patent drawings made, send us an email at info@invention-patent-drawings.com or call us at +1-917-508-8816.